Today I’ve got something special for you. 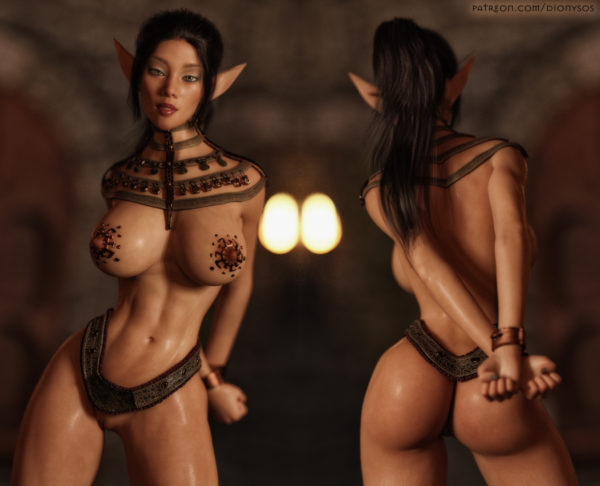 deviantArt user Marcelle-ledbetter wrote this nice little story about this picture of my elvish slave Nia:

As soon as the Princess was out side the Palace walls to she shouted for her servant to ready her steed. She ran as fast as she could to her room and tossed off all her trappings of the Elven Court.
She dashed back down where her squire was waiting with her mount. She swung her leg over and kicked with her heels. The squire was almost knocked to the ground by her rambunctious exit. She knew her body was about to explode. She had to get far away from the prying eyes of the Palace as fast as she could. Her naked body bounced furiously as she attempted to drive her mount vigorously into the forest.
She looked back, no one was following her. Soon she could hear the waterfall ahead as she galloped the last few yards to her secret place where she would not be disturbed.
Yes, yes, finally here! She launched herself onto the carpet of moss beside the waterfall and spread her muscular thighs. Her hands worked masterfully until there was a crescendo. Exhausted she fell back reveling in her ecstasy.
Sleep captured her as the anxiety left her body.
Suddenly she was startled by shouts and attempted to spring to her feet. To her utter dismay she was secured by a net and men were all around her. She recognized their garb.
Slavers!
She shouted, “I am the daughter of the Elven … “
The sentence was never finished as one of the brutes struck her across the head with his club rendering her unconscious.

I love it! What do you think?