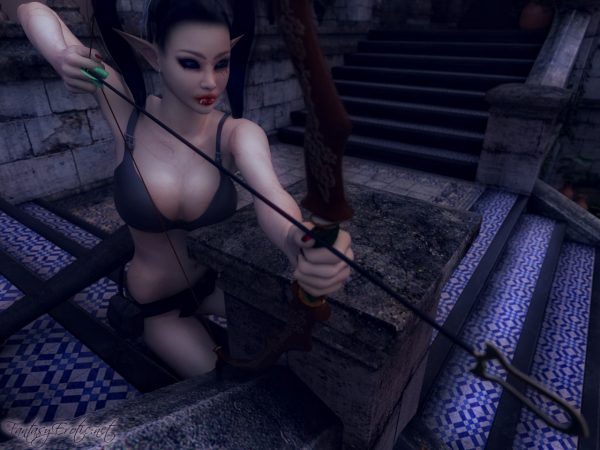 This is an older image, I made some years ago. It’s still one of the pictures I made with Luxrender and Reality which produced an awesome quality. Now I use Nvidia Iray as it’s faster and the workflow with DAZ Studio is smoother.

However, over at my deviantArt account a nice user with the name vladiola wrote some nice lines in the comments of this pictures. And I wanted to share this with you:

I hope the evil (though admittedly young, busty, and EXTRA CUTE!!!

) dark archer will get herself a taste of the medicine she so intently poised to administer.

Before she released her arrow, another arrow launched with remarkable marksmanship plunged between her melons deep in her mean Albae heart.

While she’s arching back with a silent cry and sprawling herself on the stone floor, the last thing she felt was a pair of slender arms snaking under her armpits, two warm and soft (Oh, I’m always such a romantic

) hands cupping her titties and her body’s being dragged away.

To where she would never know because she’s already dead.

Five seconds, and the stairs are empty again as if the cute Albae archer never existed…